EBD} loaded up and truckin'

T-minus 2 days and counting!
then we'll be taking off for our 1st trip out east. we're looking forward to seeing everybody along the way. it's been a little rough getting shows everywhere we wanted (see future engagements section for dates/cities we're still working on), so for now this is what we're working with.

thanks to everyone for/still helping! we've got some really cool shows lined up and hope to add a few more along the way!!


.:Other Notes of Interest:.

since the last time i wrote it feels like the band has managed to stay pretty busy even though there's been a lot of "none band" stuff taking up most of our time.

}}}we played a few really great TX shows. one was at the Double Wide (dallas) with the Angelus & My Education! another was a showcase for Ultra8201 at La Zona Rosa (austin) with UME & White White Lights!! the most eventful show by far was Good Record's (dallas) 9th anniversary party. it was an all day event with over 20 bands. there was free food and beer, and our set was cut short by the DPD. thanks to everyone that helped put the day together and everybody that showed up to party! BEST TIMES!!!

}}}we drug out all the mics, cables, and recording devices, and knocked out a batch of new demos! we ended up doing 6 new songs!! good stuff!!!

}}}we took one of our new songs to a studio here in town called Klearlight and recorded it with Jay Jernigan & Jimi Bowman. the guys were cool to work with and they have a sweet little set up that suited us well. we're all really happy with the way it {Moon II} turned out and can't wait for everyone to have a listen! it was recorded for a compilation being put together by Exploding Plastic Records that's due out later this year. we'll have more info on that once we get home.

}}}we played a few songs and answered a few questions for the Dallas Observer's new blog feature/weekly wednesday night event "DC9 in Space". i think since it was the 1st time around for everyone involved it turned out pretty cool. it looks pretty great, but we didn't have everything we needed to capture good quality audio of the songs. they ended up mainly using interview footage, but we're hoping to use the song footage for something in the future! i'm looking forward to seeing how it progresses.

there is also a second clip available {here}. thanks to Pete Freedman and Hal Samples for inviting us to participate and hosting/recording the night! we also want to thank Jen Shu for hanging out and taking some really sweet photos!!

}}}although we didn't have a direct hand in it's creation, we have another great poster for our may 21st show at the Cavern. once again this one was provided by Sam Heimer. strangely enough a few days after we received a jpg of the poster we started hearing stories of a new flu making it's way around the world. spooky! could Sam be a doomsday prophet and not know it? further investigation may be required. 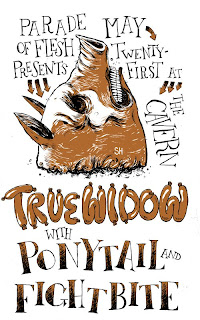