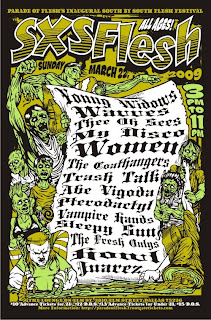 for all you vinyl junkies!

you can read more about the album below in the "hot rock wax" and "album credits {expended}" posts.

hot rock wax and other goodies 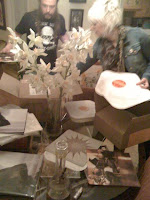 the vinyl is here and we are happy to say that we will have copies at our up coming shows!! we received 50 just prior to the west coast trip and have gone thru almost half of them. end sounds has yet to receive theirs, so shows will be the only place they are available for the time being.

the album is presented on double 180 gram vinyl, comes in a gatefold sleeve with inserts for each record and is printed in a matte finish.

thanks to Sam Heimer for the artwork and printing! looking forward to seeing these at the show saturday. you can find out more about him on his website SamHeimer.com and checkout his cool blog on the production of this poster at bottom of the ink well.


sweet video!
our good friend justin wilson (aka- the senator) has put together a short promo video for us to use and here you have it.
thanks a ton man!!
for a larger version click here.

well we all made it back in one piece! there were a couple of close calls and an incident on interstate 8 in arizona we would like to forget about, but over all the trip was a hit and we all had a great time! thanks to everyone that helped out along the way with a show, place to stay, meal, or good time! we can't wait to get back out there!! special thanks to aaroneous, wangout, and monkeybird for everything. it meant a lot having all of you with us. the trip wouldn't have been the same without you!

we have and will be posting pictures here- WEST
Posted by .:TRUE WIDOW:. at 3:08 PM No comments: